Hey there! You are looking at an old page. From 2021 onwards the release notes are in our blog under #ReleaseNotes hashtag.

The patch-release 0.4.1 of the Python SDK has been released. The version fixes various small bugs, but the biggest improvement is in the handling of CSV-files. The number parsing has been improved to handle very large integers, which were known to cause parsing errors and failures to correctly infer a working schema.

The changelog contains some more details for the real connoisseurs. You can get your hands on the new version through PyPi.

Pythons, tutorials and credit cards. That's what has been in our minds lately.

New version (0.4.0) of our Python SDK is out, and we are super proud of it! This brings quite a big refactoring in how the SDK works, so please pay attention when upgrading.

The biggest change is how the AitoClient and the new aito.api work. Code example shows the most important.

Another big change is that now you can also predict with CLI. Check for example this command (full blog post here).

Check the full list of change awesomeness at the SDK documentation site.

Big things happening. You can now pay for Developer and Production instances with credit card. We accept all major credit cards, and use Stripe payment platform. Go ahead and create your paid instance at the Aito Console! :) The not-so-good-news for you is that we will soon start to be a bit more stringent in enforcing the limits of our free Sandbox instances.

Sure ain’t no sunshine in Finland no more. Summer is gone, and autumn is here. Which, if looking for a silver lining, means fewer distractions and more coding and RPAing. We’ve got a lots of things going on, but unfortunately release notes writing haven't been one of them. :/ Here they are, nevertheless. The Console has been under some serious construction, and we’re now aiming to push out a lot of changes in a short period of time. Stay tuned for more, but below you can find out what’s there now.

(What release, you ask? Head over to https://YOUR-ENVIRONMENT.aito.app/version to see the release you’re on.)

Embrace yourself for a collection of updates from the corona-summer!

Summer is here and so is vacation season in Finland. Things haven't slowed down quite yet, but July is the traditional off-season for more or less all of Finland, including Aito. Let's see what we're going to be up to during this month. Here's, however, what we've been up to in June.

Larger pieces of work on pricing, tiers, and payments has kept and is still going to keep us busy, in a good way.

There is a robot, too

The long-pending pricing and instance tiers update is finally live. Phew! I can reveal that there were a few things to change, also outside the pricing-page on the website. ;)

After a really busy few sprints we took a short breath to fix some of the bugs we’ve introduced in the rush. Fortunately most of them were caught internally, so not many of you have hopefully been affected. New work is, of course, ongoing as well, but more about that later!

Busy weeks. So busy, in fact, that the release notes seemed to have gone MIA. But here they are, a bit late.

As most other companies in this domain, the ongoing pandemic made us switch to working mostly from home within the last sprint. It’s been an interesting experiment, as having e-meetings with 11 people, everyone at a different location, takes some getting used to. On the other hand, it’s easier to focus on individual tasks, while being able to mute every possible channel. Please stay safe and remember to wash your hands.

Here is all the goodness from our latest sprint. 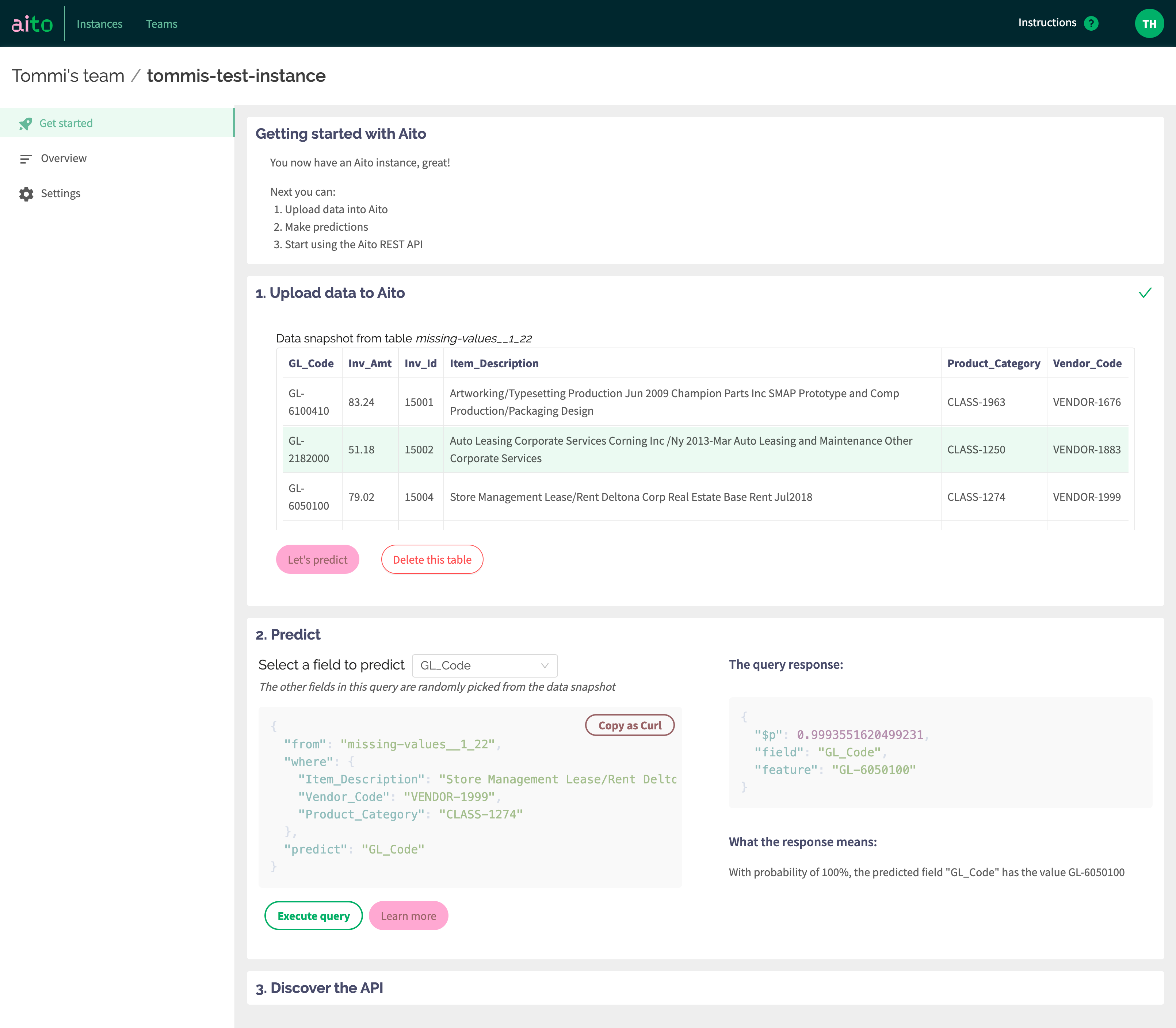 This one combines two sprints of new stuff. During the time we had a few hours maintenance break, as there were some significant improvements to our networking infra allowing us to grow faster.

Here is all the goodness. 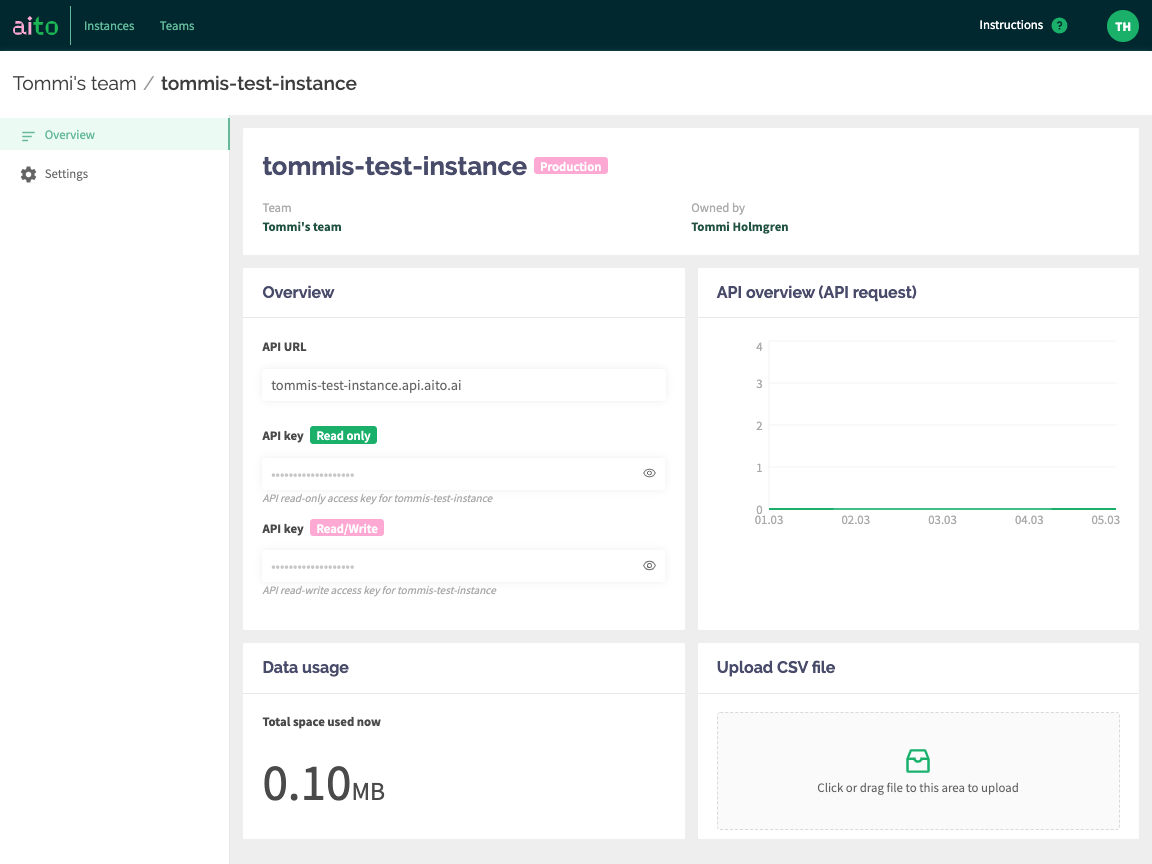 As a reminder, you can perform various tasks in Aito using the Python SDK (and some with CLI). Data upload, querying, running jobs, you name it. All of this is implemented in Python, and it’s open source’d so you can both see what’s under the hood as well as contribute. Some changes here.

It’s been a busy few weeks at Aito. Busy enough to never get as far as to write down what we’ve been up to. So here we go again. 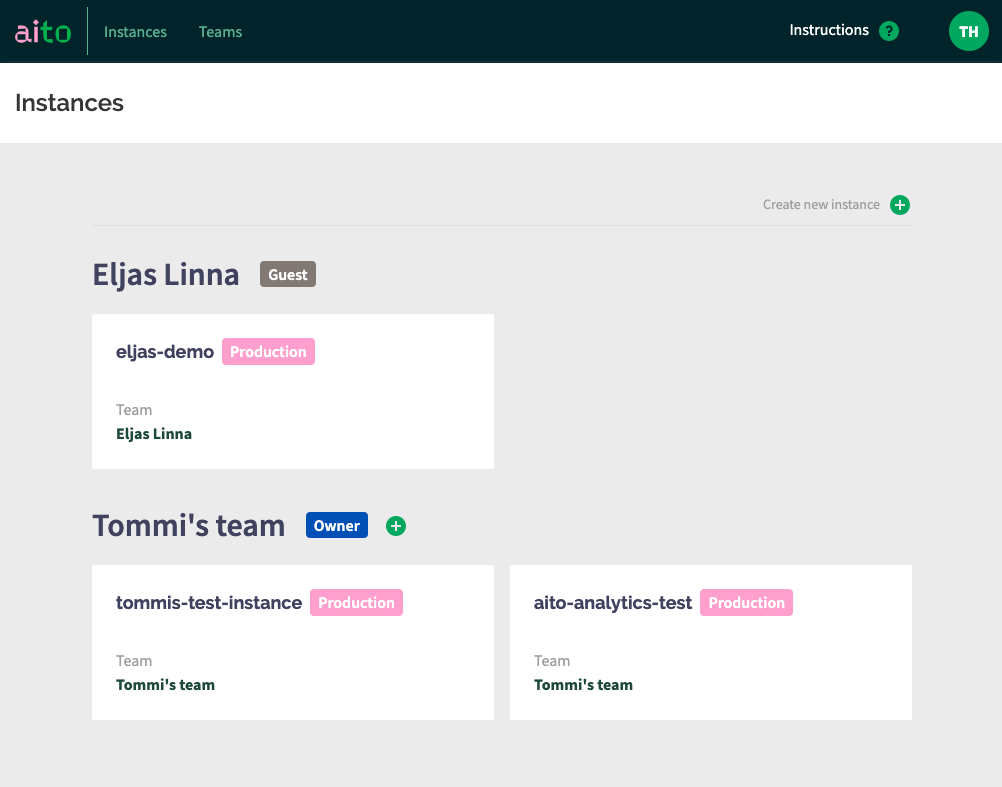 We are working through the waitlist of users that have requested access to Aito, still at a rather modest rate as we want to ensure everyone has the best possible experience. We are also still limiting the new instance provision in Console by reviewing the requests. Next couple of weeks of holiday season means things progress a bit slower. Hang in there, your turn will come soon!

Should you have questions or need help, the team is best reached through our public Slack channel.

We are getting readier than ever for publicly rolling out the Aito Console, which means our users can manage their teams and API keys as well as see usage stats online. While loads of the work lately has gone to the Console, we were also putting together some educational content and as a result, tadaaa, Aito is now on Youtube! Head over to check the content our amazing Customer Success Engineer Maria has been putting together to help you take the first steps with Aito.

Back to developer docs